Calm Down Your Yorkie

How Much Do Yorkies Cost?

How to Trim A Yorkie’s Nails

These Are The Facts About Your Yorkies Ears

What Age Is A Yorkie Full Grown? Yorkie dog is known to be an energetic and playful type of breed, that’s why many people were enticed to buy them. Some may tend to buy two Yorkies because there is a tendency that the anxiety of leaving them alone may occur. Yorkie dogs are also known to be very affectionate, devoted, love to snuggle kind of dog. But these personalities have a downside too that it believed they become territorial.

A Must-Read: How to Trim A Yorkie’s Nails

Though they are physically small, they can easily be trained. You only have to provide a spot for a newspaper and wee-wee pads. It is unclear yet to new fur parents, when will a Yorkie puppy reached it full grown. Usually, Yorkie puppies slow down in their growth by 9 to 10 months, and it is stopped when it reached its 1-year mark.

To fully understand the stages of a Yorkie, here are some pointer or reminders that you would want to consider.

Newborn- this starts from the day it firstborn up to its 7th week. There’s a rapid growth during this time as it is said that it can double in size in just a few days. At this stage, newborn can’t see and hear yet until it reached 4th week and is starting to learn to walk too.

Eight weeks to One year- on its first half of the year, the Yorkie is considered a puppy, and from 6 to 1 year, he will be an adolescent. At this stage, Yorkie is full of energy. Her curiosity will come out and starting to have habits. This stage is considered a perfect stage to begin training them both for housebreaking and some commands.

Adult- When a Yorkie reached its 1-year mark, he is officially an adult and when he reached his 4th year- young adult. And from its 4 to 8 years, we can be called him an adult.

Senior- Although there is no specific age to be considered senior, still toy breed dogs can be declared senior when it reached eight years old. Most Yorkie dogs, when reached eight years old, are still energetic, but when it’s in the 10th year, it slows down a bit. One apparent signs are that they take more naps and much more mellow.

If you take the weight at eight weeks and multiply it at 3, you will come up close to Yorkies’ full-grown weight. You can also use a kitchen scale at home, and it will show you just a tiny difference in ounces. But it is always advisable to go to a veterinarian if you want to know the exact Yorkie weight.

To conclude, it said that a Yorkie stopped growing when it reached its 1st year, but it is continually growing until it is considered an adult. When a Yorkie stopped growing, it does not mean that you’re love and care will also stop there. As they continue to age, the more they needed your love care and affection because of their vulnerable movements. It is at this point that your Yorkie can feel the love of a family and a best friend.

This Is Why Your Yorkies’ Eyes Stink

This Is The ODD Reason Yorkies Eye Water 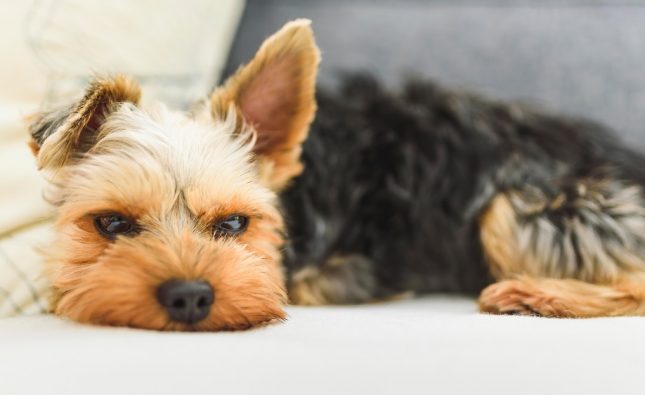 Are Yorkies Cold At Night?